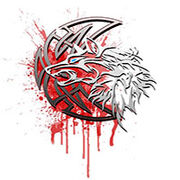 BloodMoon is an EU team of Heroes of the Storm from Italy.

BloodMoon Team was created with the intention to keep up the standard and level of team actively participating in the national and international scene at a high level, ranking among the top teams in the game. The team consists of all players with a past of hardcore gaming at high levels on almost all games, both Blizzard that of other games.

Artist and player at the highest level, she attended the Academy of Fine Arts in turin and graphics and a professional gamer. Her past as a gaming starts from a young age by sneaking Elder Scroll saga and Neverwinter Nights switching to online multiplayer going from Guild Wars and subsequently playing Guild Wars 2 and fighting games, whilst maintaining the high performance gaming by showing always an innate sense in learning the gaming tactics and team both on MOBA that on MMORPG.

Player at high levels in both PvP and in PvE on games like World of Warcraft keeping his profile hardcore gaming since the exit of that game, before acquiring the skill in PvP and its goals at all levels and by participating in the various editions of arena tournament and later dedicated to the field of acquiring PvE objectives as being in the top list in the world cataclysm in the world and maintaining high performance on Blizzard games like Diablo 3, taking on the achivement of Inferno Mode and also keeping up its level of game, of League of Legends finishing in fourth in the rank of diamond last season and always playing to it, and devoting himself at the same time to other games.

WoW History: 2004/2008 - played in italian guilds mid to high level as a restoration druid 2008 - played on Runetotem in Delirium Tremens as DK tank, but soon returned to its origins as a druid rest in the Wrath of God and ridden as external in some guilds hard core Swedes. 2010/2012 - converted to pure hard core fund the Last Try a group for 10man raid during the afternoon (and evening raidavo with EX guild as shamy rest) 2013 - expired subscription residual paid for me WoW dies.

Blizzard General History: 1998 / today - played all expansions of this game that is nothing short of legendary! (with a slightly tendende a Beautiful) I never had great results in cariera my best was ToP 25 Platiunum in HOTS 1996/1999 - I took my first steps into the world of action RPG. 2000/1012 - intermittently passing obvious, for Lord Of Destruction I infatuated like that. 2012/2014 - I lost a considerable number of hours of life to farm crypts mp10! 2014 / today - I initially liked the new style of play, but with time I realized that was not for me anymore.

I started my adventure in the world of video games in 2007 on Diablo 2 Lod Online, moving over the years on other gaming platforms such as the Playstation 3, playing various online Fps as battlefiled and callofduty. In 2011 I joined the clan Cew, with whom we have played several tournaments. In 2012 I started playing Leagueoflegends, reaching in 2014 at the end of season 4 ranking platino3. Currently I am starting a new course on "Heroes Of The Storm"

I started playing with unreal Tournament 99 for 3 years with the clan Lur with which we won several ladder ctf instagib where I did the flag carrier Subsequently I am moved Ut2k4 always with the same clan always ctf ig, always flag carrier and closed before playing in a partnership "Play" because study Followed eight years of Dark age of camelot first of Deira albion then Merlin Hibernia in Use Follow 'league of legend for third season and now Heroes of the Storm although occasionally do not disdain 2 frag on Titanfall