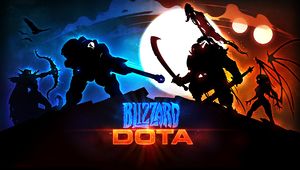 Blizzard DOTA was the original name of Heroes of the Storm early in development and refers to the previous versions of Heroes that were revealed prior to BlizzCon 2013. Originally a technical demonstration of the Starcraft 2 Galaxy Editor, Blizzard DOTA was shown off at BlizzCon 2010 and gained massive amounts of popularity. The team began to build a much larger and more robust game in the editor, adding in heroes from the Diablo and Warcraft franchises and showing the new version of the game at BlizzCon 2011. 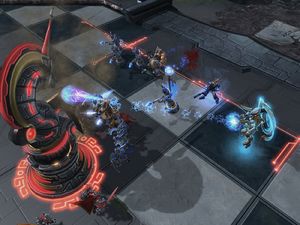 A screenshot from the BlizzCon 2011 version of Blizzard DOTA.

The first version of Blizzard DOTA shown to the public at BlizzCon 2010 was a simple rendition of Defense of the Ancients using Starcraft 2's engine and units. Heroes were added that had unique abilities and levelled up over time, as well as gold that was gained by last hitting and was then spent on items to further improve the heroes. Initially, Blizzard DOTA was planned to be released with the arcade features for Starcraft 2: Wings of Liberty, but the game was so popular that it inspired the team to reboot development and build a new game entirely.

Following the announcement of the Valve Software game Dota 2, Riot Games, creators of League of Legends, filed a trademark dispute arguing that the property was owned by the creator of DotA-Allstars, Steve "Guinsoo" Feak, a Riot employee. They added that they felt the trademark took credit away from the modification community that originally made Defense of the Ancients, and that the trademark should belong to no one, allowing the modding community to continue using it. The dispute failed, and shortly after Blizzard acquired DotA-Allstars, LLC., the company responsible for servicing and maintaining Defense of the Ancients.

After re-announcing Blizzard DOTA in 2011, Blizzard filed another trademark dispute against Valve Software, claiming that because Valve had never used the trademark before and that because Defense of the Ancients required Warcraft 3 to play and was developed in the Warcraft 3 World Editor, Valve could not apply for the trademark. On May 11, 2012, Blizzard and Valve announced that the dispute was settled - Valve could use the "Dota" trademark commercially, and Blizzard would change the name of Blizzard DOTA to Blizzard All-stars, a homage to the DotA-Allstars map.

Blizzard continued working on the game, using the name Blizzard All-stars as a code name. Though it wasn't shown at BlizzCon 2012, Blizzard stated that the game would be released after Starcraft 2: Heart of the Swarm, and that the game continued to be developed. In March 2013, Dustin Browder stated that several artists from the Heart of the Swarm team had transitioned over to Blizzard All-stars. Further expansion came in May 2013 with the announcement that Blizzard's Project Titan had been downsized and that members of the team had been moved to futher All-stars development.

On October 17, 2013, Blizzard officially announced that the game had been renamed to Heroes of the Storm.