BlizzCon 2018 is the BlizzCon event by Blizzard Entertainment that was held at the Anaheim Convention Center on November 2-3, 2018.

The Grand Finals for the Heroes Global Championship will also be held here. 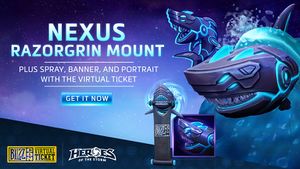 The Virtual Rewards for 2018 will be revealed over the coming weeks to BlizzCon, starting with Overwatch.[1]