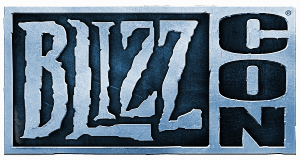 BlizzCon is an annual convention hosted by Blizzard Entertainment and held in the Anaheim Convention Center, near Disneyland in Southern California, about 10 miles from Blizzard's headquarters in Irvine. Blizzard reveals new game content and shows off their upcoming titles with playable demos, as well as offering numerous panels about their games, art displays, live tournaments, and much more.

There was no BlizzCon in 2012, due to the heavily focused development of Diablo III, WoW: Mists of Pandaria and StarCraft: Heart of the Swarm.[1]

BlizzCon is held at the Anaheim Convention Center in Anaheim, California over the course of two days (typically Friday and Saturday, from 10 am until 10 pm each day).

The cost of the ticket (which varies each year) grants fans entry to the convention hall for the two days of the event and an exclusive "Goodie Bag", which often contains things such as in-game prizes for World of Warcraft players, beta keys for upcoming Blizzard games, WoW TCG Cards, and other exclusive Blizzard paraphernalia. Since tickets are limited, dates for BlizzCon and online ticket sales are announced months in advance. On sale day, the tickets are often sold out within the first few hours of going on sale.