Blackheart is a ghost pirate who has staked his claim upon the realm of Mistharbor and serves as the announcer for two maps that take place in that region: the Blackheart's Bay battleground and the Blackheart's Revenge brawl.

Blackheart is a ghost pirate who has staked his claim upon the realm of Mistharbor. According to the game files, Commodore Ford led the assault against Captain Blackheart killing him and his nefarious pirate crew.[1] His undead pirate crew has now poured onto the streets, claiming the once thriving marketplace as their new den of villainy - Blackheart's Bay.[2] 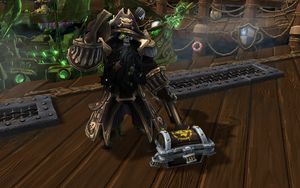 Blackheart will periodically spawn treasure chests on the map, and encourage teams to fight over the doubloons in them; gather enough before the enemy team, and he'll launch a barrage of cannonballs over the enemy structures, destroying them. Blackheart seems to like blowing stuff up just as much as getting paid, but will call off the attack if he feels he needs to be paid more though.

One team is tasked with helping Blackheart's ship sail through the bay, while the other team needs to sink the ship to win.