The High Heavens and the Burning Hells clash, quite literally, in a battlefield that represents their everlasting struggle. Two Immortals, ancient warriors locked in a duel to the death, need your help to prevail against their eternal foe. Vanquish the enemy Immortal, and you’ll find yourself charging over hallowed or profane ground—right onto the enemy’s doorstep.[1]

The Battlefield of Eternity is a two-lane battleground with a teamfight centric mechanic. Two monsters (known as Immortals) fight each other until heroes intervene. The winning Immortal joins its team in-lane to help push. Siege camps consist of three Khazra, while bruiser camps have two Fallen hounds and a Fallen Shaman who resummons the hounds until he dies.[2]

The first Battleground objective event will activate 3 minutes into the match, following a 30-second warning. The Minimap indicates upcoming Immortal spawn locations 30 seconds after the game begins. Subsequent Immortal indicators appear on the Minimap shortly after a previously summoned Immortal has been defeated.

The "Battlefield of Eternity" battleground has two lanes with all of the objectives located in the middle of the map. 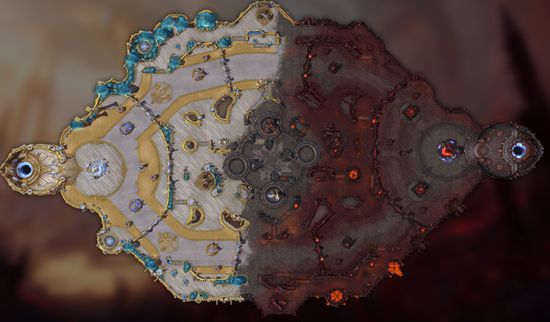 There are four circles that the two immortals will start their battle in random two circles. After one of the immortals life reach 50% they will go to the other two circles.

There are four mercenary camps to be recruited in this battleground:

The Immortals are the main objectives on Battlefield of Eternity. Warning at 2:30 spawn at 3:00. Each team is allied with an Immortal, assigned based on which side of the map your Core is located. The team with the left Core is allied with the angelic Immortal Ilarian, while the team with the right Core is allied with the demonic Immortal Beleth. The Minimap icons that represent Immortals during an event should help players to quickly identify which Immortal to attack and which to defend: The opposing Immortal uses an icon depicting crossed axes, while the allied Immortal displays a shield icon.

They always spawn first South vs North (Heaven South, Hell North). The Immortals appear to be locked in a conflict with each other; however, they do not deal damage to each other. They can only be damaged by players of the opposing team. There are four positions an Immortal can take, although the two will always be opposite of one another.

When one of the Immortals reaches half health, the Immortals are removed from the map for 10 seconds before returning in a new position. For the very first set of Immortals, the Immortals will always move to “aggressive” positions in enemy territory with the Demon in the West and the Angel in the East. Afterwards, locations are completely randomized, although the two are guaranteed to be directly opposed (north vs. south or east vs. west) and the initial position is telegraphed on the minimap.

Immortals use two abilities while they fight in the middle of the map: Cleave and an area Explosions. Both Immortal abilities display warning indicators on the ground, and can be dodged. An Immortal's abilities will not harm Heroes allied with it. The Cleave is a charged knockback whirlwind and has a 14 second cooldown, with the Immortal charging for 2 seconds before dealing heavy damage, knocking back any enemies 4.375m and stunning for 0.5 seconds. The Explosions are area stun circles and have a 14 second cooldown, taking 2 seconds to detonate before stunning any enemies caught for 2 seconds while dealing heavy damage.

While the Immortal’s abilities are easily avoidable if they are the only concern, they are quite punishing if they do hit, incentivizing defending teams to use their crowd control and displacements to set players up for Immortal knockbacks and stuns. Classic examples of this are Alarak, Diablo, and Garrosh.

Once one of the two Immortals is reduced to 0 HP, the surviving Immortal flies to the center of the map to charge up over 15 seconds, depositing two Regeneration Globes. At this point, any remaining hit points of the surviving Immortal are added to it as a shield. This means that an Immortal that survives with full hit points will be almost twice as hard to defend as an Immortal who survives with very low hit points. Once the Immortal is fully charged, it will fly to the lane that has sustained the least damage to enemy structures.

In lane, an Immortal has ranged attacks so long as it has shields. Each attack it makes drains shields until it has none. The Immortal switches to melee attacks afterward. The Immortal retains similar abilities to its racing incarnation, with the exception that the stun only summons up to 3 circles instead of 5.[3]

Once the Immortal is killed in lane, the next phase starts in 1:45. This gives teams time to regroup, push lanes, and pursue Mercenary Camps. Subsequent Immortal indicators appear on the Minimap shortly after a previously summoned Immortal has been defeated. The respawn positions are on random positions, but never the same as the previous one.