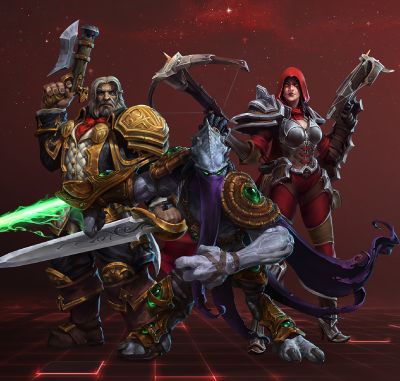 "Slayers of Heroes and bringers of pain."

Assassin heroes do a lot of damage in a very short time, usually to single targets. They should focus on killing enemy heroes and try to avoid counter-attacks. Assassins deal tremendous damage and can pick off unsuspecting enemies, but must choose their battles carefully due to their lack of resistances and hitpoints. With the Caldeum Complex event, this role was split in two: Melee and Ranged Assassin roles.

These are the powerful pain-bringers of the Nexus, offering tons of damage but lacking in durability in team fights. As such, it's crucial for Assassins to carefully position themselves in the backline and commit to the battle when their opponents' focus is elsewhere. Approaching team fights in this way will allow the warriors to absorb the brunt of their enemies’ attacks.

Assassins can be broken out into burst-damage and sustained-damage. Burst-damage Assassins such as Kerrigan and Jaina can deal a devastating amount of damage in a short amount of time, and should look for these opportunities to unleash their full barrage on their enemies for maximum effectiveness. Jaina, for example, relies heavily on well-timed combinations of spells to maximize her burst damage. Look to capitalize on stuns, or surprise your enemies from a bush to maximize damage and quickly take someone out of the fight.

Sustained-damage Assassins like Raynor and Valla, on the other hand, are generally better equipped to poke at their opponents and keep up constant pressure. When using sustain-damage Heroes, look to constantly attack targets from a safe position in order to deal as much damage as you can.